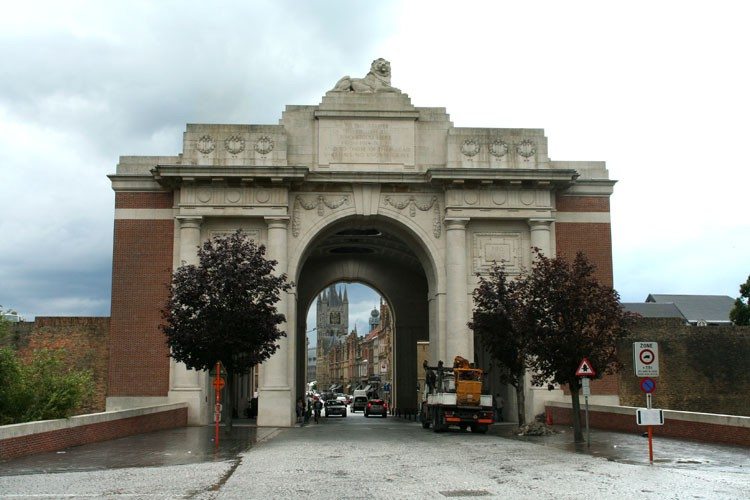 ‘They march tonight’ said the Man-at-Arms,
With the moon on the Menin gate.
They march when the midnight bids them go.
With their rifles slung and their pipes aglow,
Along the roads, the roads they know,
The roads to the Menin gate. [Anon]

Find Somewhere to Stay in or near Ypres:

Every night at 8pm in Ypres the traffic stops at the Menin Gate.

Members of the local Fire Brigade parade and Last Post (a British Infantry Bugle Call) is sounded on the roadway under the Memorial’s arches. This has been carried out without interruption since 1929 (except for the period of German occupation during World War Two) in remembrance of the British and Commonwealth troops who fell in the First World War.

The people of Ypres have never forgotten the loss of civilian and military life in Ypres and the Ypres Salient. As you stand in the main square of Ypres today and survey the ornate buildings around you it is hard to believe that the whole area was razed to the ground during the war and then later completely rebuilt.  It took until 1935 to rebuild the Cathedral and the Cloth Hall.

Ypres, or to use more correctly the local Flemish tongue, Ieper (or “Wipers” as the British troops humouressly called it) was the centre for much of the British and Commonwealth effort in the First World War. It is situated in an area referred to as Flanders which is a centuries old word meaning flooded land.

The town itself sits on a wet plain astride a complex of waterways designed to drain the surrounding land.  Beyond that, running in a broad sweep clockwise around Ypres from Passchendale in the north-east via Messines in the south to beyond Kemmel in the south west is a low ridge that puts the town at the centre of a natural amphitheatre.

Essentially, during WWI the Germans occupied the ridge surrounding Ypres and could observe everything that moved in the Ypres Salient forcing the allies to move troops usually by night.

For four years the British and their allies tried to force their way up onto the ridge while the Germans attempted, equally as hard, to capture the town of Ypres. The fighting was continuous, the result was death and destruction with the town of Ypres being reduced to rubble. The magnitude of the losses were so great that the Salient has numerous British and Commonwealth Cemeteries including Tyne Cot which is the largest such cemetery in the world.

During the battle of Messines in April 1918, the German forces attacked and captured Messines making the British situation so desperate that Field Marshal Sir Douglas Haig, Commander-in-Chief of the British Expeditionary Force, issued his famous order: “There must be no retirement. With our backs to the wall and believing in the justice of our cause each one must fight on to the end.”

So why did the allies decide that they needed to hold the town of Ypres so desperately and seemingly at whatever the cost in human life?  In pure military terms, taking account of the terrain, it was not a suitable defensive position.

Much of the answer to this lies in the understanding of the core strategies employed by both sides which, in turn, resulted from some of the national alliances that had developed over the previous decades.

In 1882 a Triple Alliance was established between Germany, Austria-Hungary and Italy.  This left the Russians feeling vulnerable and the French, still nursing their wounds after their defeat in the Franco-Prussian war of 1871, diplomatically isolated.

Meanwhile, having dismissed Otto Von Bismarck, the new German Emperor Wilhelm II allowed the secret Reinsurance Treaty with Russia to expire in 1890, despite Russian requests to renew it.

The answer for both France and Russia was a Dual Alliance in which Russia would gain cheap loans from the Paris Bourse to help rebuild deficits in their army and to build strategic railways that could bring troops to the German front.

After extensive negotiations, the Franco-Russian alliance was agreed in August 1892 and stipulated that if one of the countries of the Triple Alliance (Germany, Austria-Hungary or Italy) attacked either France or Russia, its ally would attack the aggressor in question.

This treaty is by no means the cause but is a crucial step towards the First World War because most treaties aim to solve conflicts of interest between countries whereas the Franco-Russian alliance was effectively an alliance directed against another country, most notably Germany.

To this was added the Entente Cordiale, a written and partly secret agreement signed in London between France and Britain on 8 April 1904.

The agreement was a change for both countries (even thought there had been an earlier Entente Cordial between them in 1843) due to:

So German military tacticians now found themselves with a grave concern:  Germany could find themselves having to fight both France and Russia on two fronts and forcing them to divide their resources.  Their strategic solution was put together in a Plan that aimed to knock out one of her antagonists quickly (the French), and then deal with the other (the Russians).

This plan was called the Schlieffen Plan, a battle plan drawn up by German tacticians under their Chief-of-Staff, Field Marshall Count Von Schlieffen in which they planned for the defeat of France in just six weeks.

If hostilities did start, Germany expected France to concentrate its forces in the Alsace-Lorraine region along their border with Germany.   So in the Schlieffen Plan, the idea was for Germany to attack France through Belgium but this could bring Britain into the conflict due to the Entente Cordial and the 1839 Treaty of London which guaranteed Belgium’s neutrality.

Therefore in the Schlieffen Plan, Germany prioritised the capture of the French and Belgium channel ports as quickly as possible in order to deny Britain easy access to the conflict.  This became known as, “The Race to the Sea”.

Von Schlieffen died in 1912 and is supposed to have said on his death-bed, “Keep the right wing strong,” referring to the need to capture the channel ports as quickly as possible.

The Route to the Sea

And hence the importance of Ypres because, if held, it blocked the route of the German Army to the ports on much of the French and Belgian coast.

Ypres occupies a strategic position at the centre of a road network that leads to the coast.   (The defence of Ypres was also to become important because it eventually became the last major Belgian town that was not under German control.) Indeed the British Chief of the Imperial Staff, Field Marshal Sir William Robertson advised the British Government on 25 June 1915 against retreating to the Channel Ports, an option contemplated by the Cabinet after the defensive losses at the Second Battle of Ypres, arguing that, “It would leave the British ‘helpless spectators’ in France’s defeat”.

Ypres never did fall into German hands during the war. But according to British Official Military History, the danger of the Allied line being broken and rolled up at Ypres in October & November 1914 was “one of the most momentous and critical moments of the war, and only by the most desperate fighting did the Allies succeed in maintaining their front”.

Had they given ground at that stage, the whole of Belgian territory may well have been lost and the Germans would have reached Dunkirk & Calais and secured their objective.

It is arguable that had Britain (and other Commonwealth Countries) not entered the war, the German Schlieffen plan would quite likely have worked and France could well have been knocked out of the war as planned with a catastrophic effect on British sea communications which would have been to the detriment of Britain and its Empire.

From a British perspective the Ypres Salient was of outstanding importance.  Today Ypres remains an attraction for British tourists who flock there in seemingly ever increasing numbers to learn about and pay homage to the losses that were so great one hundred years ago “In Flanders Fields”.

Out along the Menin Road to Hellfire Corner, the road became one of the most infamous and dangerous places for the British to move about on the Western Front.  A crossroads and railway crossing about 2 kilometres due east of Ypres on the Menin Road became known as “Hellfire Corner” because the Germans, with a view from their positions on the ridge, shelled it constantly. The Menin Gate, the Menin Road and Hellfire Corner have become three names bound together in British Military History.

The Menin Gate War Memorial was built and opened in 1927. It commemorates the British soldiers whose bodies were never found. On its huge panels are carved 54,896 names of men with no known grave who died in this area between 1914 and August 1917. The designer thought there would be plenty of room for all the names, but there was not, so a further 34,984 names of missing soldiers (from August 1917 to the end of the war) are carved on panels at Tyne Cot Cemetery (see picture at foot) not far away.

When the farmers and other civilians returned to the salient at the end of the war, one landowner decided to fence off an area containing British and Commonwealth trenches and to leave it untouched as a lasting memorial.

The name of this site is Hill 62, named from the identification given to it on allied military maps of the time.  A visit here gives the visitor a clear understanding of the invidious and frightening position of the allies in their trenches which are in close proximity to the German trenches which, being on higher ground, overlooked them.

The advantages of the rise in ground can be seen and understood when visiting these battlefields. Tyne Cot is a fine example as the Cemetery was built on a site occupied by two German Concrete Machine-gun Bunkers with a view across the open land as far as Ypres itself. Allied troops would have to have advanced straight into their withering fire when attacking this German-held position.

It is not only the crucial advantage of the view across the enemy’s positions and rear areas that gave the Germans an advantage but also in the daily life of their soldiers. Their positions were greatly preferable as they had better drainage being on higher ground which was important because the area of Belgian Flanders around Ypres is generally low-lying with a damp coastal climate; it has a heavy, waterlogged, clay-based soil,and it is in an area that is prone to flooding.

The site at Hill 62 demonstrates life in a trench when being overlooked by the enemy. Steel plates still exist that gave allied riflemen some protection when trying to return the enemy’s harassing fire; and three tunnels still exist showing how the allies had to resort in these circumstances to digging tunnels forward in order to reach a position where they could capture land by building a new network of trenches forward of their current position.

It is hardly surprising that at the end of the war, Ypres was awarded the Military Cross from Great Britain and the Croix de Guerre from France.

The Battles of the Ypres Salient

2nd June to 14th June: The Battle for Mount Sorrel

7th June to 14th June: The Battle of Messines 1917
31st July to 10th November: The Third Battle of Ypres (sometimes referred to as the Battle of Passchendaele)

The Phases of the Battle:

9th April to 29th April: The Fourth Battle of Ypres (aka Battles of the Lys)

The Fourth Battle of Ypres (Battles of the Lys) comprised 8 phases:

From October onwards, the Allies advance to the east, pushing the German Army further away from Ypres and away from all the destruction left in the area from four years of fighting.

Flying to over 60 sunshine destinations across the world with fantastically low-priced flights.

“Our goal; to offer seats to independent travellers and to give them the chance to fly with us to our many destinations without buying a package holiday.”

THE MARKETPLACE FROM DEAL LOCATORS 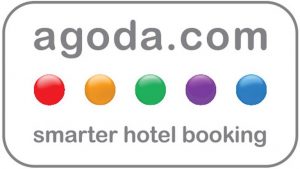 Bookings all year round